COVID-19 and Your Family Pets

Home UncategorizedCOVID-19 and Your Family Pets

COVID-19 and Your Family Pets

Should you be concerned? A virus is a submicroscopic infectious agent that replicates only inside the living cells of an organism. Thus, viruses cannot multiply but must be replicated by the cells that they invade. Viruses can infect all types of life forms, from animals and plants to microorganisms, including bacteria and archaea. Coronaviruses are a large family of viruses that are common in humans  and many different species of animals, including camels, cattle, cats, and bats. Animal coronaviruses can infect people and then spread between people. While this is rare, it can happen.

According to the American Veterinary Medical Association (AVMA),  the betacoronavirus that causes COVID-19 is SARS-CoV-2. Like MERS-CoV (the cause of Middle East Respiratory Syndrome) and  (the cause of Severe Acute Respiratory Syndrome), SARS-CoV-2 appears to have its origin in bats. “Sequenced virus obtained from U.S. patients is similar to that found in China originally, which suggests a single, recent emergence of this virus from an animal reservoir. However, the precise mechanism of evolution is not known.” The AVMA states that at least two scenarios have been proposed. The first has the virus evolving to its current pathogenicity through natural section in a non-human host and jumping to humans. There are no documented cases of bat to human transmission of a coronavirus; previous coronaviruses have passed through an intermediate mammal host before human infection. The identity of the SARS-CoV-2 intermediate host is currently unknown, but several have been suggested including pangolins and stray dogs. In an alternative scenario, a nonpathogenic version of the virus would have jumped from an animal host to humans and then evolved within humans to its current pathogenic state. Since its initial outbreak at Huanan Seafood Wholesale Market in Wuhan, China, in late 2019, COVID-19 has since infected more than a million people across the globe. To understand and control the transmission of COVID-19, scientists are rushing to study the coronavirus causing the disease: SARS-CoV-2, previously named 2019-nCoV. SARS-CoV-2 is zoonotic, which means that the virus originated in animals and jumped to humans. A critical challenge is to determine which animal transmitted the virus to humans.

Yang Zhang’s Research Group at the University of Michigan reports that based on the research in their lab, they believe that pangolins may have served as the hosts that transmitted the coronavirus to people, causing the COVID-19 pandemic. The pangolin, also known as a scaly anteater, is the only known mammal with scales and is found in Asia and Africa. Since January 2020, the current consensus among the scientific community is that SARS-CoV-2 originated in horseshoe bats. However, it is unlikely that bats directly gave the virus to humans based on what’s known about transmission of earlier zoonotic coronaviruses. Instead, scientists suspect that the bat coronavirus infected another animal (possibly the pangolin), an “intermediate host,” which subsequently transmitted the virus to humans, and may have been transmitted to humans via a wild animal for sale at a wet market in Wuhan, a city in central China. Genetic analyses have come up short of pinpointing the culprit so far, but among the prime suspects is  the pangolin. 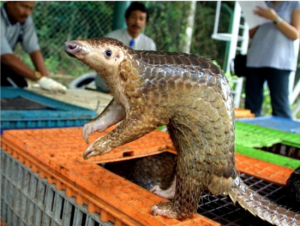 The first case of an animal testing positive for the virus in the United States was a tiger that had a respiratory illness at a zoo in New York City. “We do not have evidence that companion animals, including pets, can spread the virus that causes COVID-19 to people or that they might be a source of infection in the United States” the AVMA reports. At this point, The AVMA recommends the following: 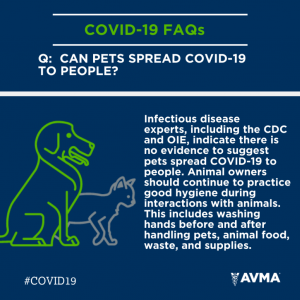 This author hasn't written their bio yet.
Admin has contributed 1 entries to our website, so far.View entries by Admin

We're currently offline. Send us an email and we'll get back to you, asap.

Licensed by the Florida Department of Education, Commission for Independent Education. License no. 3145.
Copyright © 2022 American College of Applied Science. All Rights Reserved. Designed by larrythecoder